Jack is my friend. We attended church together. That is how I know Jack. He was one of the first people when we moved to MN to include my family in community activities.

I received a call this past summer to report that Jack was diagnosed with ALS. I know what an awful disease this is and what the prognosis looks like for Jack. So when I was making an onsite visit to one of my favorite clients in MN, I knew I needed to visit Jack and Barb.

He can not transfer; he has lost most of his distal extremity function; he is on a bi-pap because the disease has impacted his diaphragm. He is on Hospice. Barb also has MS, so she is unable to do physical care for Jack in the way of ADLs and transferring. He has two paid caregivers from a local agency (he is a two-person lift now) and his devoted daughters. One who takes off work every Monday and Friday and the other who takes off work on Thursdays. He has a team of neighbors who “put him to bed” every night.  Jack is “lucky” in many ways.

Jack has done the spiritual work and told me, “I am lucky. I get to say goodbye to everyone and tell them how much I love them. Not everyone gets to do that”. Jack is determined to show us how to live – and how to die. On the day I visited him, he had just received his “wheels” the wheelchair accessible van, and his daughter took him to a local tavern where he bought the place a “round” and had an afternoon with the “boys.”

He had just rolled back to the house when I pulled into the driveway. To my amazement, his swallowing is intact. He is on thin liquids and asked if I wanted a glass of wine. I said no, I had to drive later that night – he said: “well will you get me one?” He had a lapboard, with a square of dycem, a wine glass with a metal straw (to save the turtles), a ring that you put on three-ring paper packets, and a piece of painters tape to keep it in place (see pic). My OT heart was proud! Adaptive feeding equipment at its FINEST! 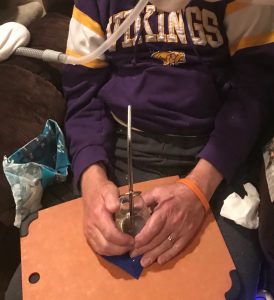 Jack said to me – “I am lucky” because I have support. Sure, Barb and the girls are going to be sad when I die, but it is going to be OK”, and he proceeded to show me a drawing of the memorial garden he wants to have donations go to at the church in his name.

Jack is prepared. Jack has support. His family has support. Jack is ready to die. Barb reported this time has been a gift. A gift for him and the family. “We don’t want him to go, she said, but we have done the work”.  With hospice, spiritual counseling, family, friends, and In-Home Care, Jack will get to create his perfect death script.  He is “lucky” because he has had the gift of “time” with Hospice.  Jack knows ALS will kill him.  He wants to spend as much time as he has left – talking with family and friends. Drinking wine and eating good food until he cant.

This is what we want for our loved ones. To live on their terms. To create their own script.

This is why you fight every day for referrals.

To support families in times of transition.

Every Referral you get – is Jack.

As I kissed him on the forehead as I left his house – I knew I would not see Jack alive again.

This is Home Care

This is why you do what you do every day.

Getting out in 18-degree weather

To cold call (10% of the time just as a reminder to the sales process!)

So that YOU can help a “Jack” on his journey. 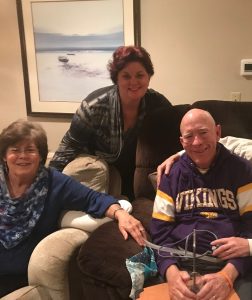 Thank you for what you do.